Backlash is not a good thing.

Before we start….  This article may seem somewhat critical of the mill/drill and lead one to the conclusion that it is underpar and not worth considering.  While this may be the case for the majority of people in need of a serious mill, there is one market in which it is really the only option, and that is the hobbyist on the go.  There are many hobbyests who are not blessed with propper workshops and who must live in rented accommodation, often moving as circumstances and life opportunities present themselves for whome bulkey cast iron machine tools are out of the question.  I have my mill set up in my bedroom and am content in the knowledge that when it comes time to move, I can unbolt it from the desk and pack it in a cardboard box, which I will be able to lift and carry downstares myself.  This would be out of the question for any more substantial mill.

The Proxxon mini mill/drill consists of the BFB 2000 stand and z axis, the KT 150 XY table and the BFW240/E spindle motor and power supply.

The stand has a cast alluminium base with strong fluiting on the underside and a machined upper.  Out of the box it has 2 bolt holes at the rear for desk mounting, but this is not sufficent, it benifits much from another 2 aditional holes drilled at the front corners and countersunk, with appropriate screws to hold it onto what ever you mount it on. (don’t even think about not mounting it, it will wobble all over the place)  the pillar is a steel tube… it is ok to start with but you will want to fill it with concrete at some point for added stability and vibration absorbency  or better yet get a solid steel one.

The z axis has the standard annoying rotational ‘feature’ (does anyone ever use those?) to enable you to rotate the whole axis about the horizontal unfortunately it is more another source of misalignment and wobble which would have better been omitted in my opinion.  Set it and forget it or better yet fill the hollows with concrete.  The z advancement is done either by a rotary screw handle for milling or a draw bar type arrangement like a normal pillar drill for drilling.  a small leaver on the side changes which one is engaged at any one time.  The whole z axis assembley is a littly too shoddy for my liking with some pretty nasty backlash, that said and in fairness to proxxon solving the problem of the dual controls is very necessary to perform both drilling and milling and is not a mechanically easy thing to do.  I have yet to conceive of a better solution to this problem, though there is plenty of room for improvement.  In particular the z lock is a very small screw into the aluminium dovetail, this will undoubtedly strip and need replacing at some point and is critical to using the mill functionality as without it the whole assembly screws and vibrates itself down into the work piece

The XY table is where real improvements can be made.  Out of the box there is a lot of backlash in both axis, but this can be almost entirley overcome by improveing the lead nutts and adding thrust bearings to the leadscrews.

The leadscrew assembly is very primitive, shown below with a spring washer, even that was my addition!  it has no propper bearings out of the box, just flat washers

Adding thrust bearings helps reduce backlash a lot as well as making the feel of the controls a lot better.  Don’t worry too much about stabalising the lateral movement, there isn’t much that can be done with the stock mounts in that regard, but some cheap ebay ball thrust bearings and a spring washer are well worth it. 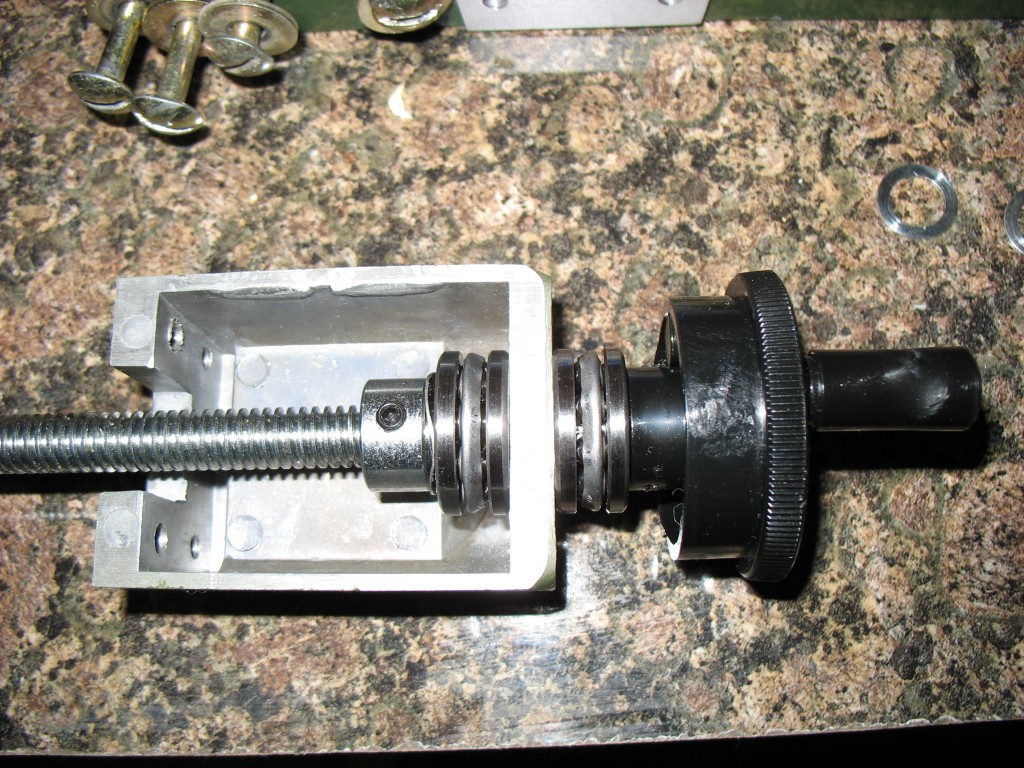 Next the lead nuts, which have a very loose fit on the leadscrews.  Initially I was going to make new ones from delrin, but the mounting is such that unless you have a lathe (I didn’t at the time) that is not really feasible.  The brass nuts can however be improved by cutting a slit and forcing the sides together.  I used a jewellers saw to cut an accurate slit, though with care it could be done with a hacksaw.  You can see the section I removed beside the nut bellow.  The gap is about 1mm 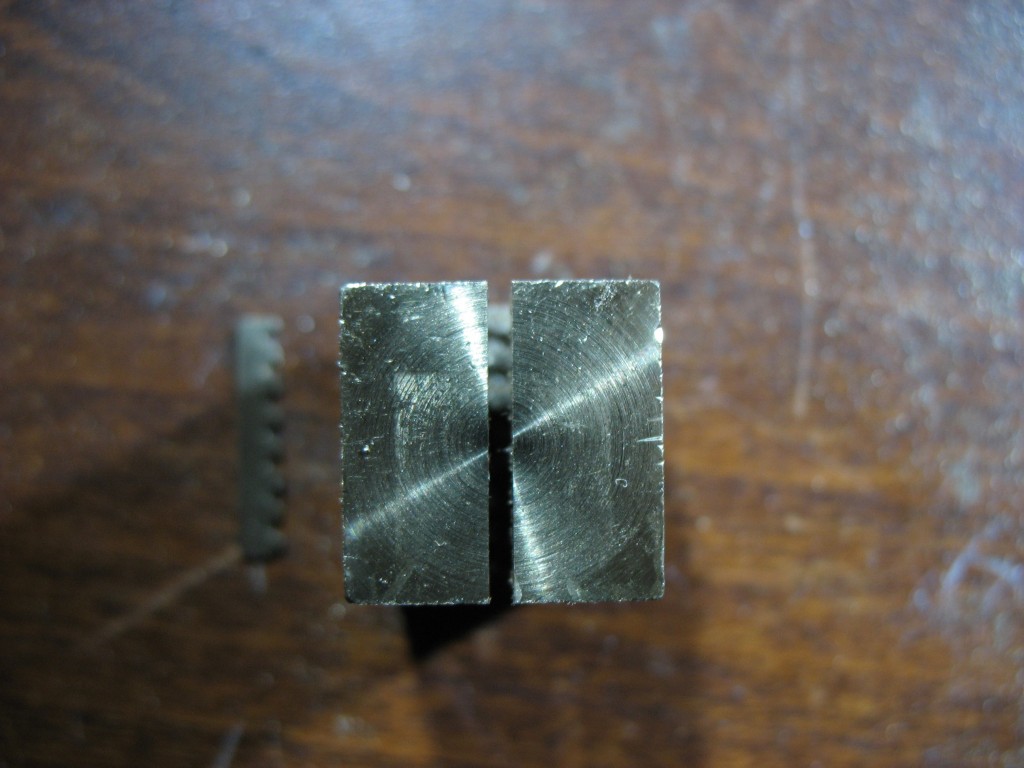 The sides can now be squashed together with a clamp while testing the tention with a leas screw.  When you are happy *carefully* solder the sides together or they will spring back.  Do not use led free solder, it won’t be strong enough and be careful not to use too much or it will fill up the threads.  It is important to get the slit just the right width so as to not leave a big gap when squashed. 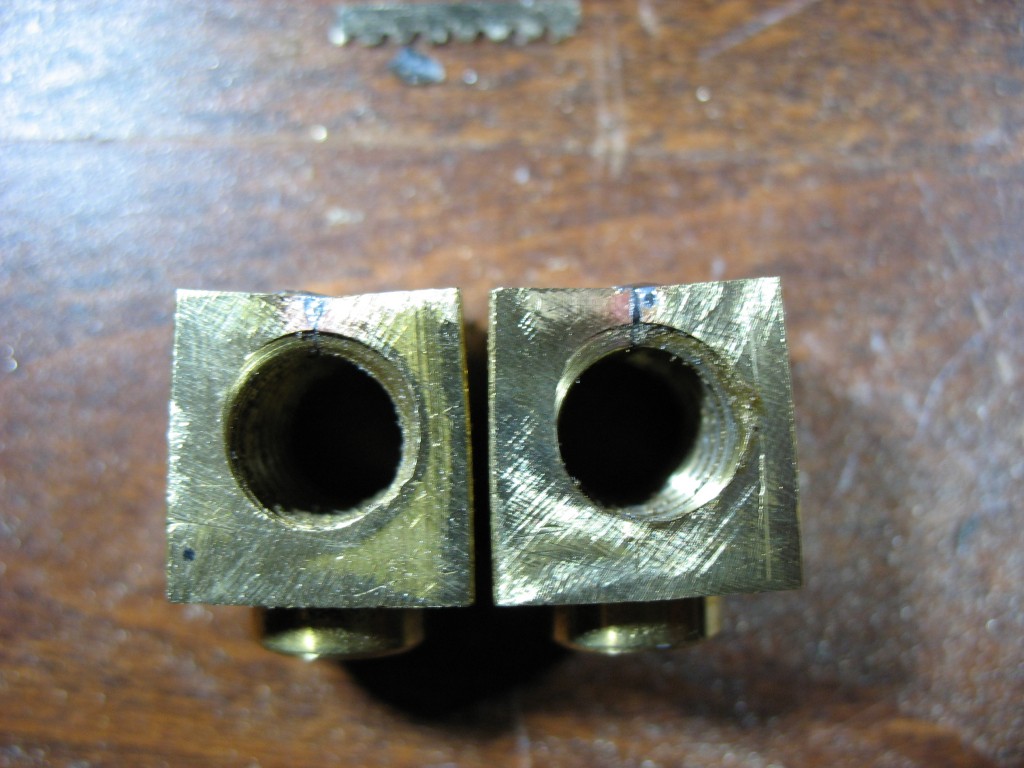 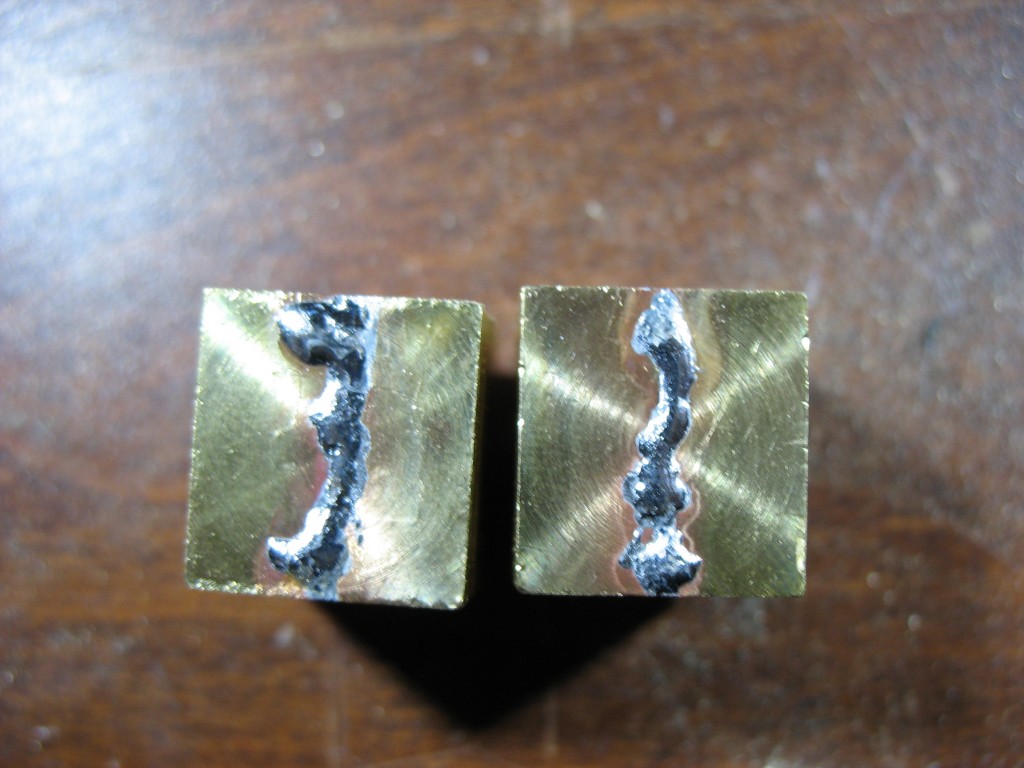 Initially I considered all sorts of screw tensioning and spring loading schemes, as well as worrying about the strength of the solder joints but I have been useing these modifyed nuts for about 2 years now and they are showing little signs of ware or failure.  with the above 2 improvements backlash on the xy table has been reduced from almost a full turn of the handels to less than a tenth of a turn.  I think some fairly radical re-engineering may be needed to get much better than that, new lead screws would be a must as the ones that come with it are not that great.

The spindle motor is actually excellent, the best bit almost.  Very quiet running and appears to be very accurate.  It comes with 6 sizes of proprietary collects from 2 to 6 mm which is a little restrictive for drilling, but it has a standard thread so a normal chuck can be fitted, and there is plenty pf power to drill even 10mm holes.  Be aware if getting a chuck that as this is a light machine, the slightest imbalance on the chuck will cause massive wobble and vibration and may damage the spindle motor.  Low mass chucks are better in this regard, even a cheap £3.50 mostly plastic one causes less wobble than a supposedly better heavier Porta  offering on my machine.  Unfortunately the power supply is not so good  mine kept overheating and cutting out at the slightest load due to a faulty thermal switch and required fiddling with.  It still cuts out sometimes but is usable for the most part.  The motor very rarely even gets warm.