~Because rigidity is critical.~

One great improvement to the Chinese mini lathe is replacing the very crappy mechanism used to hold the saddle against the bed with a tapered wedge version.  This drastically reduces the play in the saddle and is really a must before parting operations are attempted.

Before you embark on this, due warning it is definitely the most fiddly annoying upgrade I have done.  I will attempt to present here the problems I had and provide advice so you can do it better!

They are cast iron, banana shaped and have a rubbish finish.  Furthermore adjusting tightness is done by two grub screws that sit in the threaded holes and provide distance adjustment against the saddle casting.  Bolts then go through the larger holes to fasten the plates to the saddle at the offset provided by the grub screws.  The problem there is it’s nigh on impossible to adjust the grub screws since they are facing down and there is stuff in the way.  I always ended up forgetting the grub screws and finger tightening the main bolts.

Here are the parts laid out (sorry about crappy photo, I was documenting it as I built it)  The spacers and wedge retainer could be made out of one piece if that’s what you have to hand. 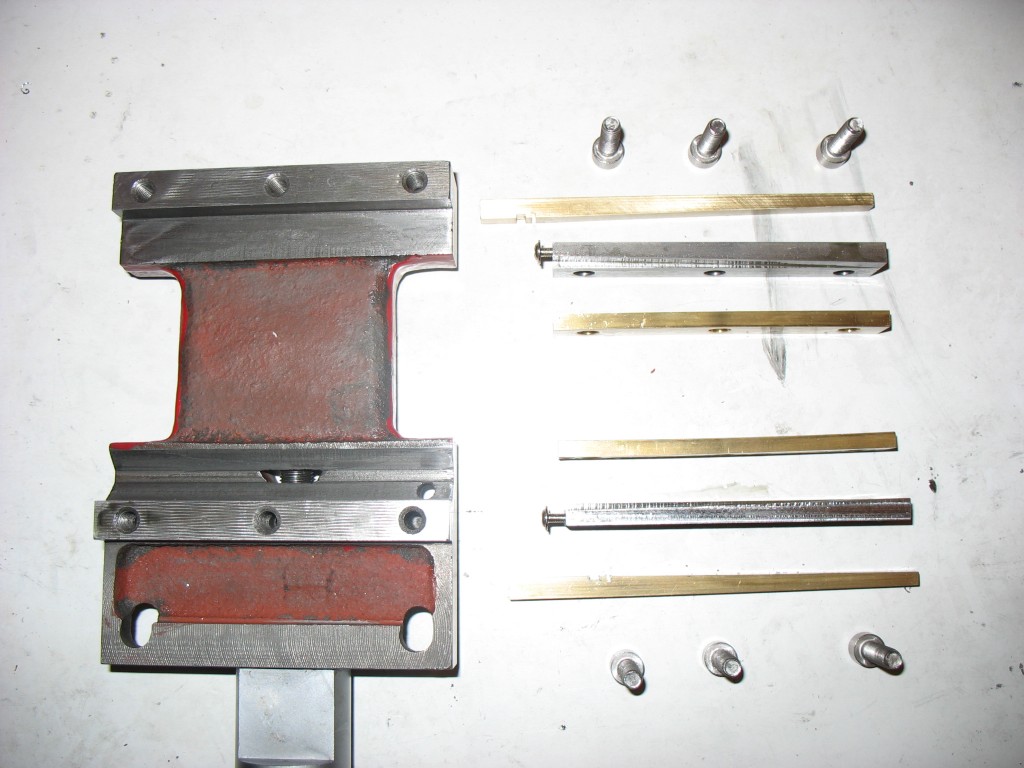 New parts next to the saddle, where they will be mounted. 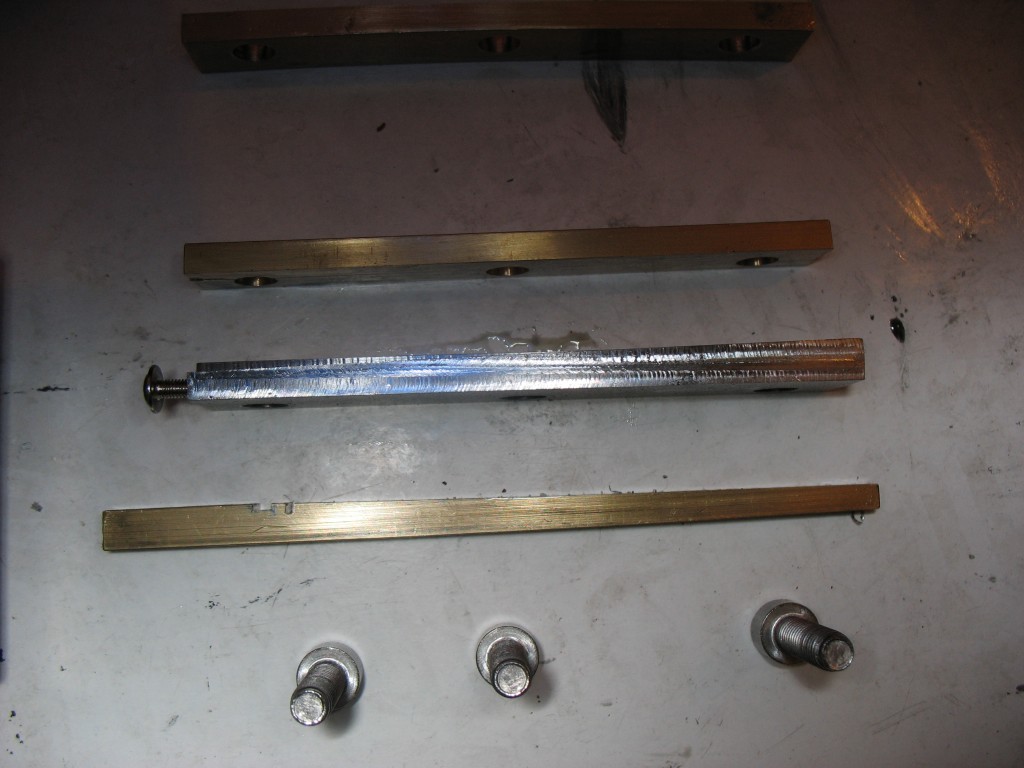 The tapered wedge and its mating taper must be the same gradient.  I suggest either making up a master taper and using it like a (un!)parallel or setting a pivoting machine vice to about 1 degree and leaving it there for the duration of machining all parts.

The parts are bolted to the saddle like this 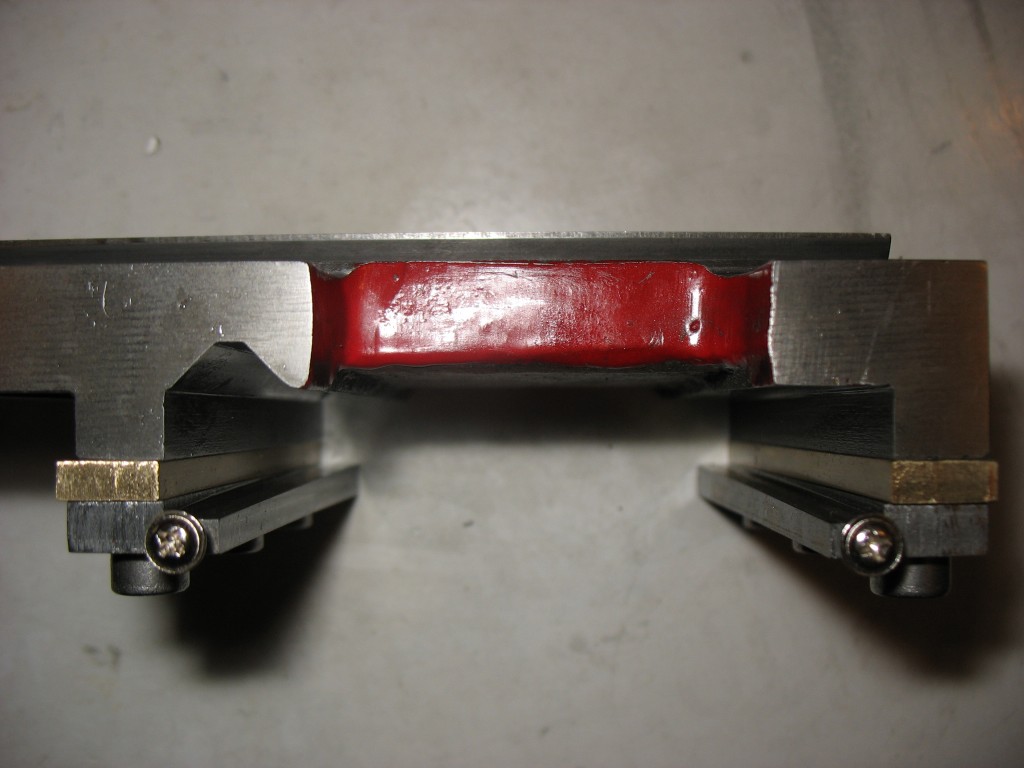 New parts fitted to the saddle.

New parts installed on the saddle.  remember the rack&pinion for the saddle drive handle takes up space!  I needed to modify mine and machine out a groove for it to run in! 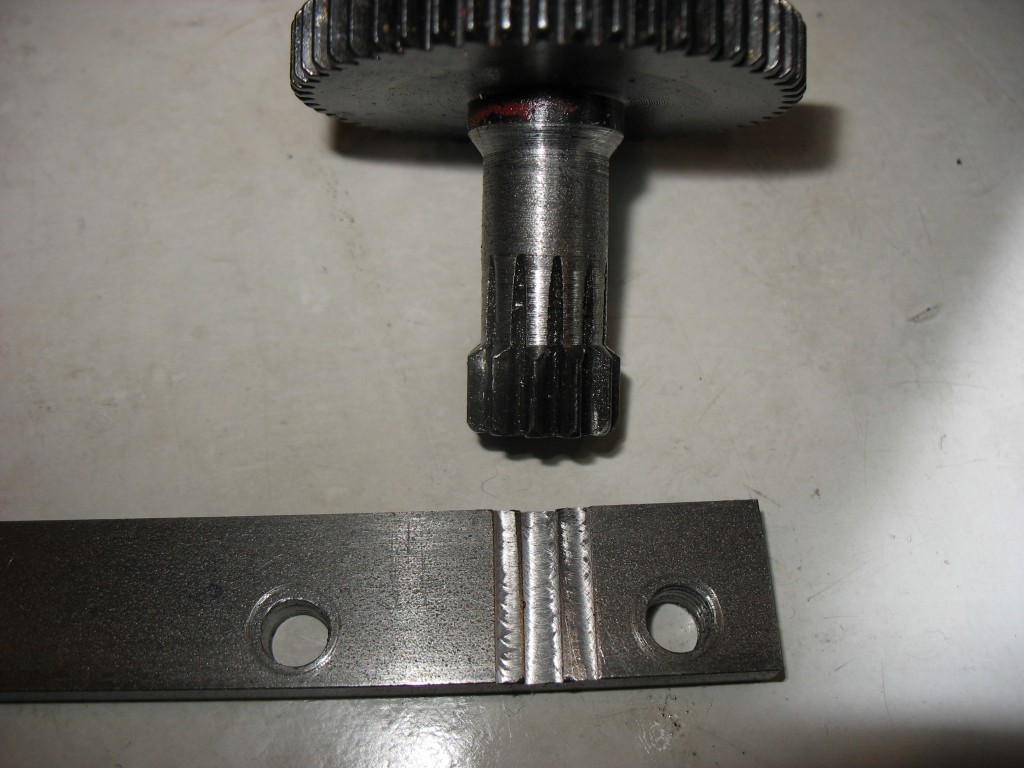 Only the end of the pinion gear contacts the rack, so you can remove the rest without effecting performance.  I didn’t want to make it too thin though as the metal isn’t so good quality, so i milled out a groove in bottom of the taper holder part

The saddle fits onto the bad the usual way, with vertical slack being adjusted with screws that drive in or pull out the wedges.  Before fitting it though, you need to take the rack off the front and the sheet metal chip catcher thing off the back and clean up the under side of the ways.  With the original system of saddle retention, there was so much slack it didn’t matter much but this is somewhat more high precision.  You will need to scrape off rather a lot of thick red (in my case) paint, then go over the metal with various grades of wet&dry until it is reasonably smooth or it will ear the brass wedges and have a tendency to lock up.   I removed the rack while i was at it and cleaned up behind there as well.  I had to run a tap through the bolt holes for the rack, since they were so full of oil and grot the bolts wouldn’t go back in them.  Unfortunately this whole cleaning and lapping process was extremely messy and I didn’t get any pictures of it. 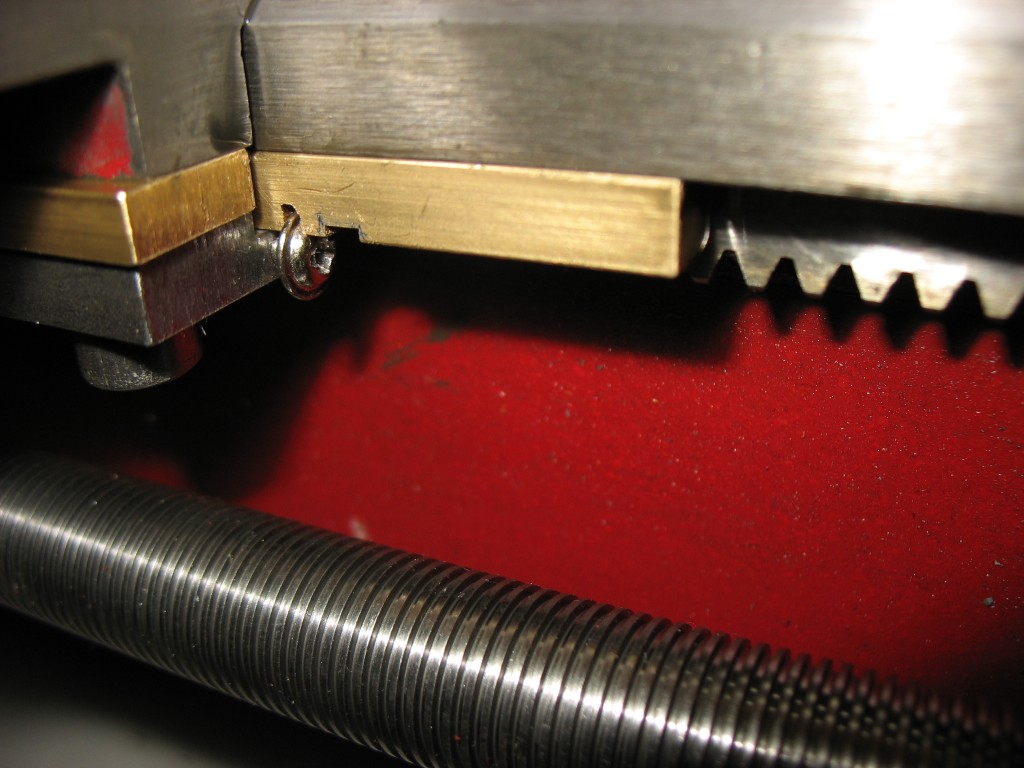 Saddle fitted to the bed with the upgrade.

When doing this yourself pay particular attention to the screws you will use to drive in the wedges.  Normal bolts with standard heads will be too small, and won’t engage sufficiently with the wedge since there is enough slop and wobble in the thread that they will push out.  The shallower cut just beyond the end of the screw shown above was my first attempt with a standard hex bolt.  I had to resort to computer fan screws with an enlarged head to get them to hold the wedge in place properly.  They could probably benefit from being a little larger, but work well enough for now.  Remember also that as the saddle moves over the bed, one direction will try to push the wedges out, and the other will try to push them further in, jamming the whole thing.  These screws stop that and are critical!

I hope that has proved useful to anyone planning to perform this upgrade.  Results are very good, finishing cuts with power feed are much improved and parting off becomes a possibility.  Before this upgrade attempting to part anything off would result in the cutting bit rolling under the work piece in a very alarming fashion, now all that happens is the lathe stops if it gets overloaded,  the cutting bit stays right where it should be.