Welcome to by far the most popular page on this site.  I even spell checked it so it looks less like the work of a 5 year old :P

TIG (Tungsten inert gas) is also known as G.T.A.W (gas tunsten arc welding) or sometimes helearc which refers to the use of helium in the original designs, and confusingly a patented design to spiral air in plasma cutting torches (a completely different process)

TIG welding is used when a very accurate and neat weld is required. It also has other advantages, for example Copper, titanium and aluminium can be welded.

In order to build a vacuum chamber for various projects, a tig welder was required to weld the vacuum flanges into the chamber.  I already have an arc (stick) welder, which can weld Stainless with the right rods, but a neat vacuum tight weld is needed.

unfortunately TIG welders cost rather a lot of money (£500 upwards) and not being blessed with such funds at the time, It was decided to make one.

The basic circuit is very simple; the arc welder will supply the welding power, which will be rectified by a large thyristor rectifier (because that’s what was in the junk box) and smoothed by a huge capacitor bank.  A high voltage arc-starting pulse was superimposed on the welding current by a rather lethal LC spark gap oscillator system similar to that used in a Tesla coil primary.  A small neon sign transformer was used to power the high voltage start system

Here is a picture of the nearly completed welder being tested.  The torch was a lucky ebay find :)  along the top are the capacitors for smoothing the rectified AC.  Aach capacitor is 22000uF rated at 70V so the total value of the bank is 88mf or 88000uf!  not surprisingly the arc is very smooth.  on the right is the rectifier and on the left is the high voltage starter system, and some other relays to control various bits.  The silver thing on the table is the gas relay, it was a vacuum valve and was found not to work very well in this application.  It was later replaced.  On the far left is the argon cylinder.  pure argon is required for tig welding.  The gas regulator is for oxygen, but it works (some regulators can’t be swapped however, for example fuel gasses like hydrogen, propane and acetylene are sufficiently different that the regulators are not interchangeable.  regulators for fuel gasses have a right hand thread whilst non flammable gas regulators have a left hand thread (there are exceptions to this though))

This is a pic of the front of the welder. The arc welder connects to the 2 lower bolts and the torch to the 2 upper bolts.

this was the first attempt, and it was rather difficult to weld with.  some improvements were made, which helped slightly. 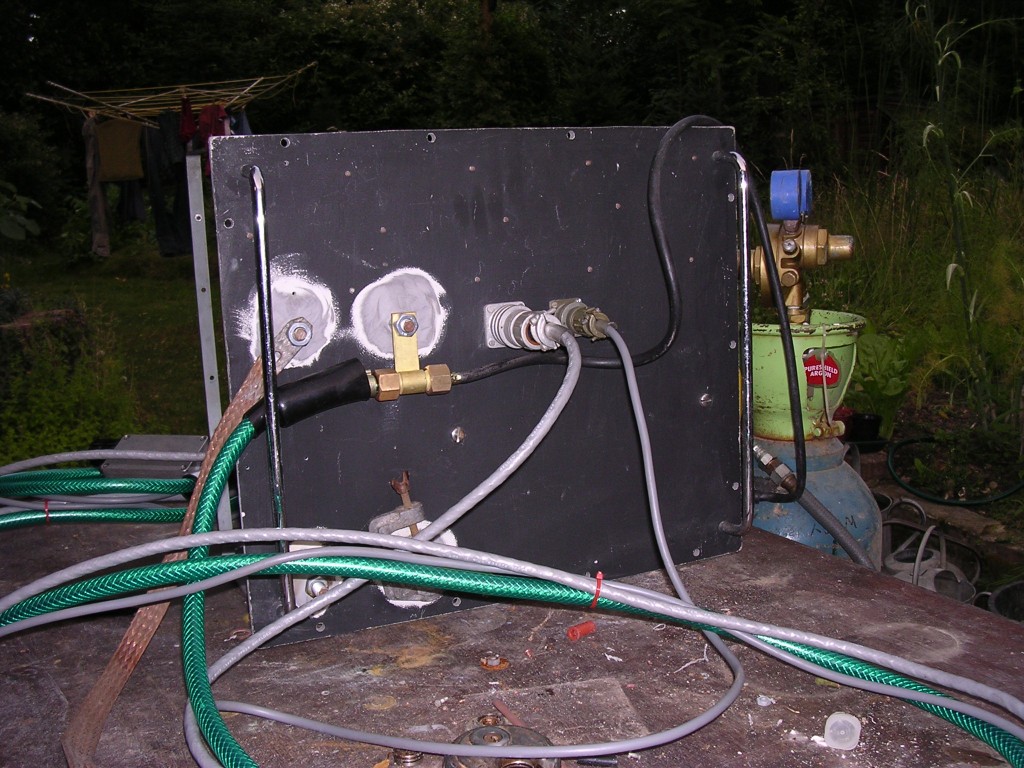 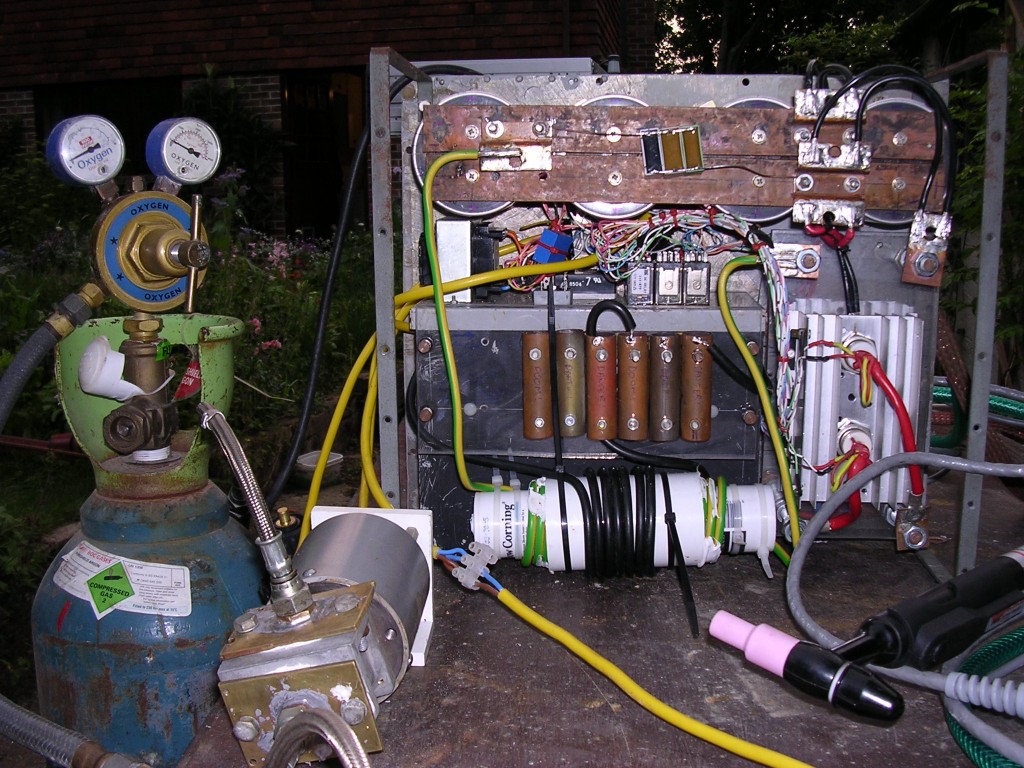 Unfortunately this was not a great success.  while it is possible to do nice looking and functional welds with it, and indeed i did succeed in building a vacuum tight chamber using it,  it was by no means easy, and you are very limited as to what you can weld.

Here are some limitations and areas for improvement:

Please don’t ask for  a schematic, there may have been one once but its long gone now.  its not that complicated though, just a rectifier and a large smoothing capacitor with a vaguely tesla coil style high voltage system.  i also made some improvements later, like  automatic switching off the high voltage starter when an arc was struck.  there was also much mucking about with capacitors and relays to get timing circuits to continue delivering argon after the arc was extinguished and such.